A Message from the Inspector General

Now more than ever we must ensure that vital U.S. Department of Labor (DOL) programs, such as unemployment insurance, occupational health and safety protection, and labor law compliance, deliver on their essential missions efficiently and effectively.

With the benefit of work on earlier disaster responses and stimulus bills, the Office of Inspector General (OIG) immediately developed a comprehensive Pandemic Response Oversight Plan to address known and expected risks resulting from the pandemic.

Our oversight will be conducted in four phases and focus on the Department’s response to the pandemic, particularly under the Coronavirus Aid, Relief, and Economic Security Act (CARES Act). Areas of review will include DOL’s efforts to administer and oversee the expansion of unemployment benefits, protect workers and miners from exposure to COVID-19, and provide guidance and enforce CARES Act regulations relating to paid leave. For instance, we have already issued an advisory report on initial areas of concern relating to unemployment insurance based on our previous work. More information about how we are conducting oversight and responding to the pandemic is available herein and on our website at www.oig.dol.gov.

This Highlights edition presents a summary of selected activities, accomplishments, and findings reported in the OIG’s Semiannual Report to Congress for the six-month period ending March 31, 2020. During this reporting period, the OIG issued 12 audit and other reports, with 57 recommendations for corrective action. The OIG’s investigative work resulted in a total of 134 indictments, 102 convictions, and more than $63 million in monetary accomplishments.

We will continue to work constructively with the Department and Congress on our shared goals of identifying improvements to DOL programs and operations and protecting the interests and benefits of the nation’s workers and retirees during this unprecedented time.

The U.S. Department of Labor (DOL), Office of Inspector General (OIG), received an appropriation of $26 million to carry out oversight activities of DOL’s response to the coronavirus (COVID-19) pandemic under the Coronavirus Aid, Relief, and Economic Security Act (CARES Act). Specifically, the OIG received $25 million to oversee the unprecedented expansion of the Unemployment Insurance (UI) programs provisioned by the Act and $1 million for oversight of DOL activities supported with funds appropriated to prepare for and respond to the coronavirus pandemic.

The OIG’s oversight will focus on the Department’s response to the pandemic, particularly under the CARES Act. The OIG’s oversight work will be conducted in four phases covering the allocation periods for CARES Act funds and post-allocation. This plan is subject to change as the OIG continues to conduct risk assessments to identify specific areas for review. Funding for oversight related to activities other than UI programs is provided by the $1 million CARES Act funding, as appropriate, or by reprioritization of existing OIG resources. See the appendix for select criteria for DOL’s response to the coronavirus pandemic. 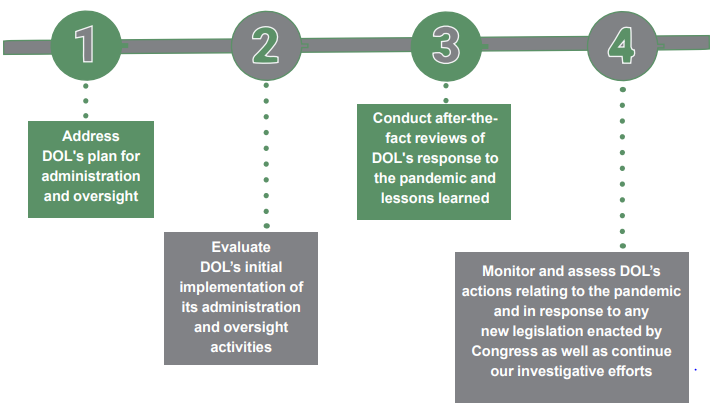 During this reporting period, we issued audits and completed investigation involving the Department’s Office of Federal Contract Compliance Programs (OFCCP), Occupational Safety and Health Administration (OSHA), and Wage and Hour Division (WHD) programs. Highlights of our work in these areas include the following:

During this reporting period, we completed several investigations involving worker and retiree programs. Highlights of our work in this area include the following:

The OIG Hotline is open to the public and to federal employees 24 hours a day, 7 days a week to receive allegations of fraud, waste, and abuse concerning DOL programs and operations.