Start saving early. You’ve heard it once, you’ve heard it a million times. There are a few reasons why that’s a good idea—to get in the habit, to manage risks to your investments and income, and to allow more time to contribute to your savings and let them grow. But the strongest case for starting early boils down to one phrase: compound returns.

Compounding: The Miracle, the Magic, the Power?

I’ve heard all these words used to describe compound returns. (OK, maybe I’ve even used them myself.) Is it hype or is it real? Let’s take a look.

A return is the money you earn on an investment. But compound returns are when things start to get fun. Compounding refers to the return you get by investing a return you’ve already earned. When you reinvest returns, those returns start earning returns of their own.

Compare simple and compound returns in this example from ICI Education Foundation’s Investing Road Trip: you invest $100 at 5 percent annual interest. At the end of a year, you’ve earned $5. You pocket your $5 and invest your $100 for another year. After two decades, you’ll have your original $100 plus 20 years of $5 earnings—a total of $200. 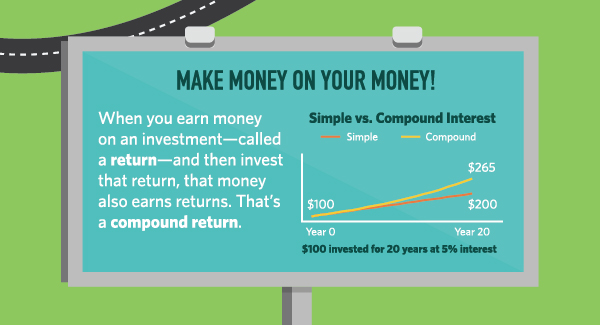 What if, after that first year, you invest the $5 return on top of the original $100? During the second year, you’ll earn $5.25, with your earnings coming from not only on the original $100 investment, but also on the $5 of first-year earnings. It’s tiny in this example, but the $0.25 difference between what you earned in year one and what you earned in year two is the effect of compounding. Over the course of 20 years, your $100 investment would have grown to $265, or $65 more than if you had not reinvested the earnings.

Over long periods of time, compounding can produce significant growth in the value of an investment. Here are four examples that show the positive effects of compounding.

The Power of Time

Consider two investors who both invest $1,000. The first investor makes a one-time investment of $1,000 and leaves it to grow for 40 years. The other starts 20 years later with a $1,000 investment, but then lets it grow for the next 20 years. (In this and the following examples, we’ll ignore the effects of taxes and inflation and assume returns of 7 percent per year.)

The Power of Regular Contributions

The Power of Starting Early

At age 65, the fast starter ends up with 11 percent more money—even though that investor only invests one-third as much as the one who starts later. The sooner you start, the less you need to save to reach your goal.

The Power of Little by Little

As discussed in last month’s post, college tuition costs can make saving for a child’s education a daunting goal. But with time on your side, this long-term goal is much more attainable.

Suppose, when your child is born, you set aside $100 a month toward future education costs.

By the time your child is 18, your $100-a-month account has grown to more than $41,000—thanks to steady contributions and compounding.

According to data compiled by the National Center for Education Statistics, the average total cost of attendance in academic year 2018–2019 for first-time, full-time undergraduate students living on campus at four-year public institutions was $24,900 (costs are significantly higher at private nonprofit institutions at $51,900). For students who received federal grant and scholarship aid, the average net price for first-time, full-time students was $13,700 ($27,000 at private nonprofit institutions).

While it would likely not cover all costs, saving $100 per month would set college-bound students firmly on the path to financing their educations.

Starting early and saving regularly, even in small amounts, lets the power of compound interest work for you, so you can reach your financial goals with less saving effort.