What Can Be Better Than An Inheritance? A Personal Matching Program

Getting an inheritance can be a good thing – or a bad thing.

While Millennials may wish their inheritance will someday pay for their retirement, that may or may not happen. According to a 2018 Charles Schwab Study, more than half (53%) of young people ages 16-25, “believe their parents will leave them an inheritance, versus the average 21% of people who actually received an inheritance of any kind.”

And, if they do receive an inheritance when they are close to retirement, that may not help them. It turns out that one out of three Baby Boomers who received an inheritance spent it within two years, according to research conducted by Dr. Jay Zagorsky, Senior Lecturer at Boston University Questrom School of Business, based on data from the Federal Reserve and a National Longitudinal Survey funded by the Bureau of Labor Statistics that studied the period 1985-2008.

A Better Option: A Savings Program With A Kick

Wouldn’t it be a better option to help youthful members of the family set up a savings program with a kick to it – a match that you arrange to ignite interest, leverage time and boost returns through compounding?

Here’s how your personal matching program could work.

Let’s say your son “Steve” is a 20-year-old college student who lives at home with you. Steve has a part-time job during the school year and works full time over summer breaks.

Steve hasn’t developed a rule set for saving money. He is not eligible for a 401(k) at work. He is not thinking about a far-off retirement, but he believes he might benefit from a nice inheritance, probably just when he might need the money when he retires.

As Steve’s Mom or Dad, you know better. You’d like Steve to learn how to become financially secure in his own right.

Here’s how you can help. You make a deal with Steve:

“For every dollar you save, I will match you dollar-for dollar for five years. But there is a catch. My match goes into a retirement plan for you, a Roth IRA, that you must agree not to touch until you retire someday in the far away future.”

That gives Steve something to think about. If he saved, say $500 a month of his own money, he would have $30,000 of savings in five years. He would also have an additional $30,000 funded by his parents in a Roth IRA that he would agree not to touch. Nothing wrong with that deal. . . But what about the constraint on not using that Roth money until retirement?

It is the maximum ($6,000) that can be contributed to a Roth IRA per year, the annual limit for funding a Roth, according to the IRS.

It also happens to avoid a gift tax obligation (the parents’ match is a gift). Since $6,000 is well under the $15,000 annual exclusion, Steve’s parents would not be subject to gift taxes for funding the Roth. (Read “IRS Announces High Estate And Gift Tax Limits For 2020.”)

Will Steve Accept The Offer?

For Steve to see the full potential of the matching program, you’ll want to show him what the Roth can accomplish over the decades between now (age 20) and age 65, a period of 45 years. The Roth will need to be invested for long-term capital appreciation potential. The best way to do that is through a simple S&P 500 Index Fund.

What If The 45 Years Turn Out To Be Terrible Markets?

This is where history comes in handy.

For skeptics, we can look at the worst performing 45 year market periods since the 1920s. For the optimists, we can review the best. While history will not repeat itself exactly, history does provide a frame of reference.

Let’s go back in time to see the worst outcome for a five year program of monthly investments in an S&P 500 Index Fund with a 45 year horizon.

What If The Next 45 Years Turn Out To Be Terrific Markets?

What If Returns Are Just Average?

What If Steve Wanted Safety Over Capital Appreciation?

If Steve had been very conservative, he may have considered the safest option, a money market fund that tracked 90 day T-Bills. The best 45-year period for money market funds (1956-2001) would given Steve an age-65 retirement nest egg of only $356,519, a 6% average annual return.

You can see these comparisons graphically in the chart below. 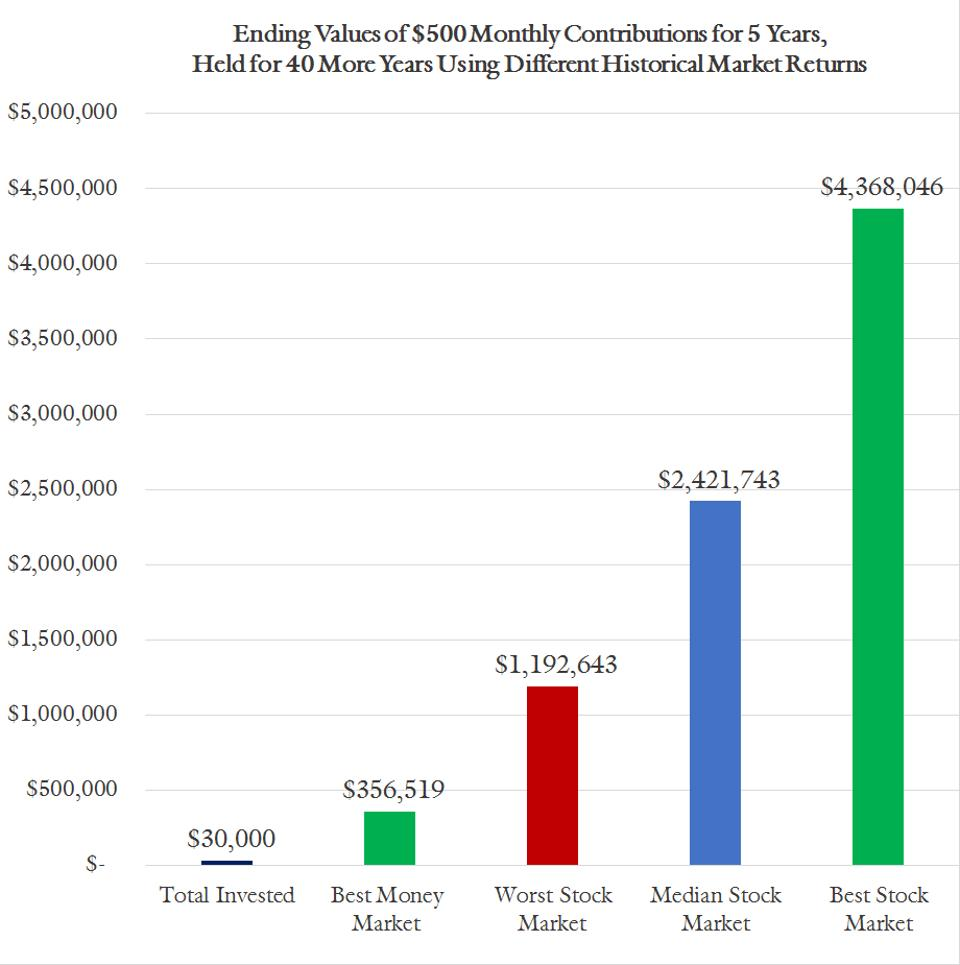 The point is this: Steve can’t control what type of market he will experience. But history can give him a frame of reference.

To accept his parent’s matching proposal, Steve needs to see the benefit of investing in himself (and having others invest in him through the match). His interest needs to be ignited through the math behind the market, the math that leverages time and boosts returns through compounding.

Your Role As A Parent

As we approach the holidays, there will be opportunities to get together with young adults in your family. Why not impart some sage advice – in fact, not just once, but as often as possible.

Start saving now in a Roth IRA. Fund your 401(k) at work as soon as you become eligible; contribute each payroll period without stopping until you retire; maximize your match. Choose investments based on long-term capital appreciation potential. Take advantage of the math of compounding. And, if a parent or family member is willing to match your savings, go for it.

After reading this post, what is the likelihood that you will make a Roth matching proposal with your child, grandchild, niece or nephew? I’d like to know what you think. Click here to take a quick survey.

Look for my next post on what happens when someone in Steve’s position starts contributing to his 401(k) at work.